The UIC gauge railway connection between the stations of Madrid-Puerta de Atocha and Madrid-Chamartín is part of an essential infrastructure for the development of a structured international-gauge network in Spain, as it will enable the interconnection of the high-speed lines that cross Madrid, favouring the interoperability of high-speed trains.

Drilling was completed on 11 February, 2011, and the tunnel will improve the operational model of both stations in Madrid, as their configuration will be transformed from that of terminals to that of transit stations.

Their commissioning will be optimised by the installation of new lines on the Atocha-Torrejón de Velasco section which will be in addition to the two which currently serve the high-speed Madrid-Andalusia and Madrid-Levant corridors.

Once these important works have been completed and the Puerta de Atocha and Chamartín stations have been restructured, the tunnel will provide the major operators with the opportunity to choose between Chamartín and Atocha as their departure or arrival high-speed station in the capital.

Madrid will enjoy the privilege of having its high-speed stations connected, something that other important European cities have not yet achieved. 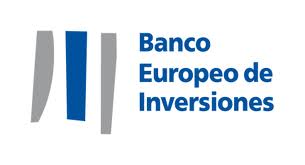 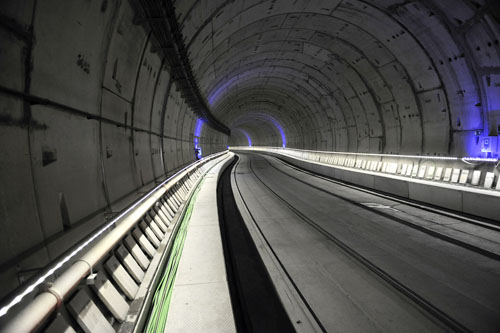 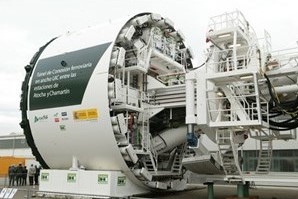 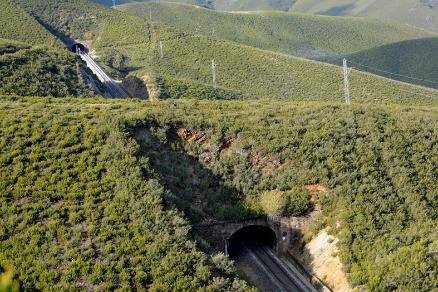 The new connection is 7.3 km long, of which 6.8 km were excavated by boring machine from the southern end of Chamartín station, which is the point at which boring started. For the first section, where it crosses Calle Mateo Inurria, a 110m-long false tunnel was created using shields of piles and slabs, under the shelter of which the boring machine was able to pass before starting to tunnel.

The route continues in a North-South direction to the Plaza de la República Argentina, where it follows the longitudinal axis of Calle Serrano and Calle Alfonso XII before crossing the Botanical Garden and finishing in the Glorieta del Emperador Carlos V, opposite the old canopy of Puerta de Atocha.

The tunnel runs beneath eight Metro lines and the two existing standard gauge tunnels between Chamartín and Atocha (via Recoletos and Sol) at an average depth of 45m. It only passes over one metro line, no. 9, at the height of Mateo Inurria street.

The tunnel was excavated in 9 months, with a daily output of about 25 m/day and maximum monthly advances of more than 1,100 m, below the urban centre of Madrid.

As this is an urban tunnel, slab track with rails covered with elastomer were used, one of the best systems for absorbing vibrations and noise

The project includes the remodelling of the sidings in Chamartín’s southern section. The tunnel boring machine was assembled in this area which is where tunnelling began.

All the emergency exits have sectorising doors in the tunnel and a pressurised isolation hall, and lead to the outside through corridors and stairs.

The cutting wheel is powered by eighteen 350 kW engines, with a total installed power capacity of 6,300 kW.

The coating is carried out with pre-cast reinforced concrete ring segments 1.8 metres wide and 36 cm thick, leaving an open interior diameter of 10.40 m.

Exhaustive reports on the condition of the terrain were made before construction began. The buildings located at both sides of corridor through which the tunnel runs were also inspected.

Instruments were also installed to carry out regular controls and for subsequent monitoring both on the surface and underground along the whole route, both in underground infrastructures near the tunnel and in all buildings within its sphere of influence.

In compliance with Civil Defence and Public Safety, the tunnel has lateral escape corridors, emergency lighting, photo luminescent signs, ventilation, fire detection and extinction systems in the tunnel and equipment rooms, and a lineal telecommunications system (Tetra) for the emergency services.

The tunnel has a low impact from the environmental point of view.The most important features are:
Related documents
You may also be interested in